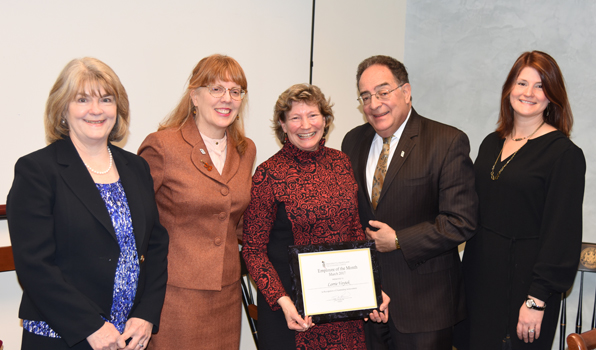 Donors feel appreciated, nursing students feel hydrated, visitors to the Living History Museum feel nostalgic, and colleagues feel like chirping — all thanks to the efforts of Lorrie Voytek.

Voytek, assistant director of development at the School of Nursing, was surprised on March 20 when what she thought was a group picture at the President’s Office with her development colleagues Laurette Hankins, Stacey Conrad, and Cynthia Sikorski turned into an Employee of the Month celebration for her.

UMB President Jay A. Perman, MD, mentioned Voytek’s work at the museum and on sustainability with GreenSON. “I also know getting back to donors is a point of emphasis with you,” he said. “And making sure that the students who benefit from the donors get to meet them and vice versa. I always tell a story about a donor at Northwestern University [Louise Ploner] who enabled me to go to medical school. I’m forever grateful to her, of course. But I never got to meet her. I never got to say thank you. So I particularly understand the importance of doing that, and I’m grateful you do, too.”

As UMB’s March Employee of the Month, Voytek received a plaque and an extra $250 in her next paycheck. Asked about the award later, she shared the plaudits with the development team (“Cynthia, Stacey and Laurette – that is our team”) and explained why she thought the group picture ruse was totally legit.

“We had 81 endowments that were created when the UMB Foundation offered a 50 percent match, which was the most of any of the UMB schools,” Voytek said. “So I thought the president wanted to thank us for that. I remember thinking ‘why isn’t Dean [Jane] Kirschling here?’ Because she is such an integral part of our success. She hand-writes thank you letters, which I think has made a tremendous impression.”

Voytek also is known for going above and beyond. Before the interview the quasi curator gave a tour of SON’s Living History Museum on the second floor just above the main security desk. The state’s only museum dedicated to nursing, it chronicles the continuing story of the profession.

Voytek, who manages the museum docents and gives tours herself, pointed out the wall of history on the left, education in the back, and research on the right. A 1928 “Flossie cap” is on display that was designed from a pattern given the school by Florence Nightingale, Voytek pointed out, adding how they were starched and fluted. “The new nurses like the antiquated instruments like the Texas Instruments calculator,” on the research wall, she added.

She shrugs off praise for her museum work, saying it falls into “other duties as assigned.” Yet that list has been growing in recent years after some cuts in the development staff. Hankins in her nomination said Voytek “has taken on approximately 50 percent of the duties of the other coordinator position, cheerfully becoming our ‘go to’ person for ordering supplies, paying invoices, reimbursing travel expenses, and helping with our many events.”

Voytek insists she’s just doing her part and is privileged to serve the students, staff, and “amazing” leadership at SON. Putting the students in touch with the donors brings her particular delight. “Most of the students are more than happy to do so and are so appreciative,” she said. “It gives you insight into a group of nurses who are going out into the workforce. I feel very comfortable and confident that we’re in good hands.”

One of the ways Voytek has repaid the students is her work with GreenSON, the School’s sustainability organization, which she co-chairs. It was formed soon after she came to the school 4 ½ years ago. With a degree in conservation and resource development, seven years on the conservation committee in her previous development job at the National Aquarium, and working with the Piney Run Nature Center before that as a stay-at-home mom, Voytek found GreenSON to be a natural fit.

“I shared with them a lot of things we were doing at the National Aquarium that we could be doing here. Slowly but surely we have accomplished several initiatives that we’re pleased with.”

The biggest one is the bottle-filling station on the first floor, so students and employees don’t have to bring bottled water. Filtered water has replaced “those big bottled jugs that would kill your back to lift.” Triple station trash cans are planned to separate trash, one for the landfill, one for cans and bottles, and one for paper. Periodic office swaps allow groups to share supplies, cutting costs and helping the environment.

Voytek, who gets off the Metro and sticks fliers in bikes to promote SON’s third annual free bike repair with Joe’s Bike Shop on April 19 to celebrate Earth Week in the School courtyard, admits conservation “has always been a focal point of my life. It’s important to the students, too. The students are asking for it so we should be providing it.”

So why do Lorrie’s SON colleagues “chirp” their praise of her? “I am a birder, I love to go bird-watching,” Voytek says with a wide smile. “They’re always giving me pictures of birds, bird books. We’ll be having lunch outside and I’ll say ‘did you hear that ovenbird?’ since I can identify birds by their sound. So they get a kick out of that and I appreciate that it makes them more aware of their environment.”