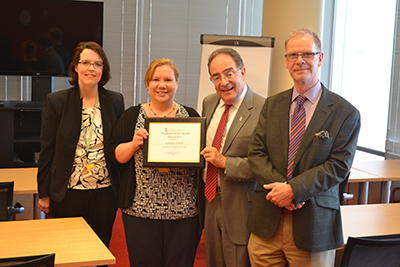 Don’t expect to see Lindsay Currier on a ski slope after she retires many years from now. She’s had enough of the white stuff. As the coordinator for scheduling at the School of Pharmacy, Currier has been responsible for rescheduling all the pharmacy classes at the Baltimore location and at the Universities at Shady Grove in Rockville, updating the 25 Live scheduling software, and sending out emails to all involved when classes are canceled or delayed, largely because of inclement weather.

“Snow is one of my least favorite things on so many different levels,” says Currier, a UMB employee for 13 years, “because I also have two little girls so, inevitably, not only am I dealing with work stuff, but they’re up early and excited because it’s a snow day, running around the house like maniacs.”

She has an early morning ally on snow days in UMB President Jay A. Perman, MD, who surprised her at a supposed 25 Live meeting on March 23 to tell her she was UMB’s Employee of the Month.

“It was good to read that since I have to get up to receive a phone call at 4:45, you’re waiting at 5 a.m. for the verdict,” Perman told Currier. “And I understand you do a very good job of juggling things.”

Perman also pointed out that Currier helps facilitate his passion for interprofessional education by coordinating the school’s academic schedule so pharmacy students can participate in the President’s Clinic and UMB’s Interprofessional Education Day. “Your school is always there when we have an activity,” Perman said. “In fact you probably know I have a bunch of pharmacy students every week in my clinic. Your colleagues talk about you as a collaborative, knowledgeable, gifted, concise communicator. Simply put, they say ‘without Lindsay we would be lost.’ So congratulations on your honor!”

Shannon Tucker, MS, assistant dean for instructional design and technology at the School of Pharmacy, nominated Currier, citing her day-to-day contributions, core values such as accountability and collaboration, and her proactive nature to solve problems “before colleagues even know they exist.”

And on snow days?

“Lindsay makes literally thousands of changes in the School of Pharmacy scheduling platform so students can get back to studying and faculty back to teaching, research, and service as fast as possible,” said Tucker, who accompanied Currier to the surprise “meeting” in the Lexington Building along with Richard Dalby, PhD, associate dean of academic affairs at the School of Pharmacy and professor in the Department of Pharmaceutical Sciences.

“Lindsay’s work requires diplomacy, collaboration, and civility under pressure; then, once a recovery plan is devised, the details must be meticulously entered into 25 Live for distribution to our community,” Tucker added. “One mistake could be catastrophic — integrated courses could become out of sequence, students could end up in the wrong room and miss key instruction prior to scheduled rotations, or an exam proctor or the AV and IT support on which faculty rely for support could be missing. Due to Lindsay's hard work and diligence, this almost never happens.”

Currier, who manages the scheduling of School of Pharmacy activities at UMB and USG such as academic courses, student events, special events, and any meetings that need conference rooms, takes pride in her work. She was surprised, and very pleased, to be the March Employee of the Month, which comes with a plaque, $250, and makes her a candidate for the Cecil S. Kelly Memorial Employee of the Year Award, which will be given at the Employee Service Awards Luncheon on April 7.

“I’m excited to be recognized,” said Currier, who began working at the school as coordinator of mental health programs. “I feel like I work really hard to do really well, but sometimes you’re not sure if it’s helping anyone.”

Now she has a plaque to prove it.