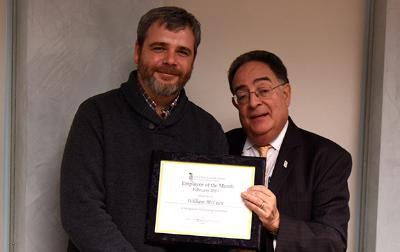 When William McLean was asked to go to the President’s Conference Room to offer advice on upgrading the audiovisual service there, he thought nothing about it. Problem-solving is all in a day’s work for McLean, who for nearly 10 years has been multimedia manager at the School of Pharmacy.

UMB President Jay A. Perman, MD, listened to McLean’s suggestions for several moments on Feb. 9, then changed the subject, letting McLean know he had been chosen as UMB’s Employee of the Month for February.

“I understand there was a big crisis in the pharmacy school,” Perman said, “and the vendor that you’d been using couldn’t handle the problem and you saved the day.”

“Well, I don’t know about that,” McLean humbly responded. “I just did my job.”

“More than your job,” emphasized Perman, who gave McLean a letter, plaque, and assurances that an extra $250 would be in his next paycheck. After Perman left the room, a smiling McLean told three School of Pharmacy colleagues, “Well, that was unexpected.”

Picking Up The Pieces

When asked, he explained in detail the “big crisis” Perman had alluded to. In the summer of 2016, the School of Pharmacy was upgrading its $3 million audiovisual (AV) system and had contracted with a company to take out all the old analog technology and replace it with full digital technology before the fall semester.

“The project went out to bid and we don’t have a lot of control over that,” said McLean, who as multimedia manager handles AV systems for the school, which has a satellite campus and does a lot of videoconferencing, recording of lectures, and interactive applications. Awarded the upgrading project in May, the contractor didn’t begin until the end of June and by late July had only completed the demolition, leaving the 45 to 50 lines running throughout Pharmacy Hall that carry AV signals — content, video, audio, control — still not working.

“Classes start mid-August. So it quickly became apparent, due to the fact I’ve been doing this for 20 years, I knew they weren’t going to be able to get this done,” McLean said of the company, which had the contract terminated with the lines still not functioning.

He learned the day before students returned that the integrated system wasn’t working. “It was interesting,” said McLean, not one to get flustered easily.

Beginning the PharmD classes the next day without audiovisual services was not an option. The school’s satellite campus, the Universities at Shady Grove, is fully dependent on distance-learning technology. Had the classes started in Baltimore and not at Shady Grove in Rockville, there would have been an equity issue. So McLean and his three-person team — Jerry Adney, Erich Gercke, and Brian Hall — jumped in with both feet.

Fortunately, they were not strangers to such disasters. A flood in 2011 almost took out the AV control room at the school. A ruptured pipe in 2015 flooded the north end of Pharmacy Hall, taking out AV service to several of the main lecture halls.

“We had disaster carts we had developed for the old [analog] system,” McLean recalled. “Modifying them, I had to come up with a way to do videoconferencing and recording of lectures in the rooms without an integrated system so I built a series of videoconferencing carts and mediasite recording carts that I then tied into the existing systems in the rooms to get us up and running.”

After some long days and sleepless nights, the crisis passed, with the next-in-line bidder coming aboard to help with the task, which is ongoing.

“Bill’s creativity and leadership of the School’s AV group ensured that coursework continued on schedule eliminating any need to consider alternate facilities, compressed course schedules, or an extended semester. The school is indebted to his leadership and technical skills during this trying time.”

McLean said he was honored to be Employee of the Month.

“In a position like mine you tend to hear all the bad things and you don’t very often hear the good things, so it’s just very nice,” he said. “Your story isn’t long enough to thank everyone, but I would like to thank my group for all the hard work they do and making me look good. I’d like to thank Tim and Shannon for nominating me and, of course, Dean Eddington and Bill Cooper [senior associate dean for administration and finance] for agreeing to finance the upgrade and to support our advanced programs.”