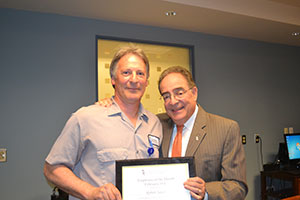 Robert Sauer, multitrade chief 3 in the Office of Facilities and Operations, thought he was attending a routine meeting on March 3. Instead, University President Jay A. Perman, MD, came in and surprised him with a UMB Employee of the Month Award.

Perman gave Sauer a framed certificate and thanked him for always being professional and respectful. “You are a very talented Facilities team member,” Perman said. “Your colleagues and I think that you are a wonderful guy and that’s just one of the reasons we are honoring you today!”

Sauer, who also received $250 as February’s Employee of the Month, is described by his supervisor, multitrades manager Wayne O’Donnell, as someone who utilizes his talents to complete projects of varying sizes and complexity, doing whatever is needed. A recent project involved him carrying many sheets of drywall up three flights of stairs to build a suite of offices.

On another project “his efficiency and effectiveness allowed the SMC Campus Center to accomplish many projects under budget that were operationally necessary,” O’Donnell said. In one case, he fixed a leak in the parking office in the campus center. “After five years,” O’Donnell said, “Rob is the person who took the time to figure out why it was leaking, where it was leaking, and how to implement a long-term solution.”

Such problem-solving skills are also what makes Sauer irreplaceable. “Rob uses his knowledge to create solutions for problems that aren’t in any textbooks,” O’Donnell said of Sauer, who joined the UMB team 2½ years ago.

In addition to providing excellent work quality, Sauer consistently demonstrates University core values such as accountability, collaboration, excellence, knowledge, and leadership with his carpentry skills, dedication to the task at hand, and customer service, even cleaning up after himself instead of calling on Housekeeping. Sauer “lives the UMB core values,” O’Donnell says, and “is an inspiration” to others around him, colleagues and clients alike.

According to Scott Swank, DDS, curator at the National Museum of Dentistry, Sauer “went well above and beyond the tasks at hand and did an exceptional job of keeping us informed of the impact of the work, progress toward completion, and he followed up on issues that were only tangentially related to the work.”