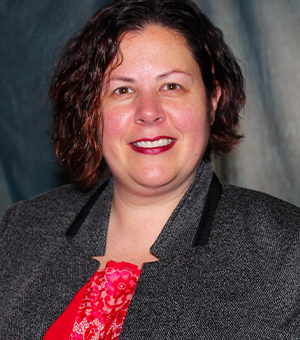 The job of principal investigator (PI) on research grants and contracts is generally reserved for faculty members, a fact C. Daniel Mullins, PhD, knows well in his role as professor and chair of the Department of Pharmaceutical Health Services Research at the University of Maryland School of Pharmacy (UMSOP).

But Mullins, a prolific researcher who is the executive director of UMSOP’s PATIENTS Program, also knows there can be exceptions to this rule, pointing to one of his program’s leaders, Michelle Medeiros, MS, MA, CCRP, director of research.

“Faculty deserve a high level of respect, but to make sure that we’re not too hierarchical, I’ve worked to get PI privileges for staff members in our department,” Mullins says. “One of them is Michelle, who is the PI on a $250,000 Patient-Centered Outcomes Research Institute [PCORI] award. I really think this shows what our staff members are capable of doing when we don’t hold them back and just let them run.”

Mullins was speaking Feb. 5 on a Webex video conference that was billed as a PATIENTS Program leadership meeting but really was a celebration of Medeiros being selected as the University of Maryland, Baltimore’s (UMB) January Employee of the Month. UMB President Bruce E. Jarrell, MD, FACS, delivered the news to Medeiros, noting they were familiar with each other from when she worked for UMB’s Institutional Review Board/Human Research Protections Office.

“We go way back, so I know all about the quality of Michelle’s work,” Jarrell said of Medeiros, who also has worked for the Marlene and Stewart Greenebaum Comprehensive Cancer Center and the Center for Vaccine Development and Global Health at the University of Maryland School of Medicine (UMSOM). “Her work with the PATIENTS Program and all of her accomplishments are quite impressive. Dr. Mullins’ team is excellent, and Michelle certainly stands out. This is a very well-deserved award.”

Jarrell turned the conference over to Mullins, who was joined by 20 colleagues from the PATIENTS Program in singing Medeiros’ praises. Mullins echoed what he had written in his Employee of the Month nomination, focusing on Medeiros’ PI role with a Capacity Building Award from PCORI.

The new project advances the mission of the PATIENTS Program, which engages in patient-centered outcomes research (PCOR) aimed at reducing health inequities and improving the well-being of communities and their residents. In the project, which began Jan. 1, the PATIENTS Program is collaborating with a local neighborhood-building nonprofit, the Southwest Partnership, to use its resources to broaden the program’s footprint in West Baltimore.

The project’s mission includes forming a stakeholder advisory board, co-developing materials for PCOR and comparative effectiveness research (CER) training and delivering it to Southwest Partnership members, and documenting and disseminating lessons learned. The project is titled “Community Based Development of Collaborative and Sustainable Partnerships in PCOR/CER (CO-DRIVEN).”

“The Southwest Partnership is an important partner for UMB and our program,” Mullins said. “It represents seven neighborhoods and six anchor institutions that work together to build an awesome community. Michelle engaged with their senior leadership, even during a pandemic, and determined that there was potential interest in them having more active participation in community-engaged research.

“Michelle’s work to make this happen symbolizes all of UMB’s core values of accountability, civility, collaboration, diversity, excellence, knowledge, and leadership. At the same time, her PI role demonstrates that the glass ceiling that often exists for staff members and women on academic campuses does not exist for people at UMB such as Michelle who excels at their job.”

After five weeks, Medeiros says the project is “going great.”

“The Southwest Partnership is recruiting advisory board members from the community and has received multiple applications, which is great considering it’s not the typical in-person engagement, it’s virtual engagement,” Medeiros said. “Many people from our community have already expressed strong interest in joining this effort.”

“Basically, I work to bring the voice of the patient and stakeholders in the community to the research table,” she said.

As for what she likes best about her job, Medeiros says it is the 20 colleagues who took time to join the virtual celebration.

“Our team works very, very well together, and we have a team approach to everything,” Medeiros says. “The School of Pharmacy also is very supportive of me being a non-faculty PI, and that’s great. I also enjoy the rapport we’ve built with the communities we work with, considering the historical difficulties of research and underrepresented populations.”

Hillary Edwards, MPH, director of methodological research and evaluation for the PATIENTS Program, says that commitment to teamwork is the key to Medeiros’ success.

“Michelle always approaches our collaborations as exactly that — as collaborations, as a team,” Edwards said. “I couldn’t imagine being on a better team or having a better companion in my own growth and development and to continue expanding the amazing work we do together in the PATIENTS Program.”

Medeiros will receive a plaque, letter of commendation, and $250 in her next paycheck as UMB Employee of the Month, rewards that made her feel “pretty awesome.”

“Last year was pretty rough because of the pandemic, but I was focused on making sure the team got through it,” she said. “So to be recognized for that effort, it feels pretty good.”