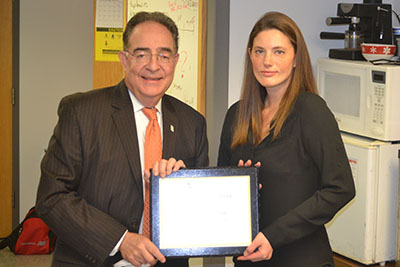 Most Employee of the Month ceremonies occur in conference rooms, with President Perman bursting into made-up meetings to surprise the honoree in front of his/her co-workers.

But sometimes rooms are otherwise occupied and alternate measures are needed. Which is how Perman arrived at the fifth-floor lab of Mark Rizzo, PhD, in the Bressler Research Building to introduce himself to one of Rizzo’s employees, Michele Markwardt, MS, on Jan. 12.

“This meeting is all about you,” Perman told Markwardt, a research specialist in the Department of Physiology who began as a research assistant in 2008. “You have been named January’s Employee of the Month. You were nominated because Dr. Rizzo and your co-workers felt you, as a member of their team, embodied many of the core values of the University— accountability, collaboration, and excellence were repeated frequently in your nomination.  They also mentioned your work, your techniques, and your publications, but mostly your commitment to excellence.”

Markwardt was thrilled, especially when she saw the plaque — “it’s spelled right!” exclaimed Michele, who usually gets a double L — and learned there would be an extra $250 in her next paycheck.

Going Above the Call

Rizzo said the recognition is well deserved. In his nomination form, he mentioned Markwardt’s ability to learn new things, such as training in protein and DNA purification procedures, and that she “has become an invaluable resource for new trainees. … The tools she has developed have been used by other research labs at UMB as well.“

He added: “One example highlights her dedication and persistence. Early on in her time here, our laboratory’s work required development of a new type of fluorescent protein suitable for quantitative work in living cells. Michele carefully screened and characterized over a dozen variants, a painstaking process that required extremely careful comparison of the brightness of these reagents that sometimes differed by only 1-2 percent. To make progress on such a project required exceptional rigor and technique, and we would not to have been able to complete this project without her. The final variant she identified has proven to be an exceptionally useful reagent both here on campus and to the scientific community at large, as her paper has been cited over 80 times in only a few short years since its publication.”

Markwardt, who also was praised for “taking responsibility and accountability for projects” and showing courtesy, respect, and a “team-first attitude,” said being nice is easy in Rizzo’s lab.

“Mark and I have a really good working relationship,” she says. “We have the same kind of working style, just really blunt. He lays out exactly what he wants from me and then I go and do it. We also have a good time, especially now with the girls in the lab [PhD students Kendra Seckinger, Nicole Snell, and Jennifer McFarland], we all laugh a lot. It’s work but it’s also fun.”

Even if sometimes the hours are long and the process of tasks such as seeking grant renewals can be grueling.

“Sometimes it’s easier to get it done now,” Markwardt, who completed her master’s in forensic science in May, says of some 12-hour days in the lab. “I can’t say I’ve ever slept here though,” she adds with a laugh.

And her feelings about being UMB Employee of the Month?

“It’s pretty surreal,” she says, turning serious, “because it’s quite a big University you know. I’m lucky. My co-workers are great, the girls in the lab are really fun. We all just get along really, really well.“