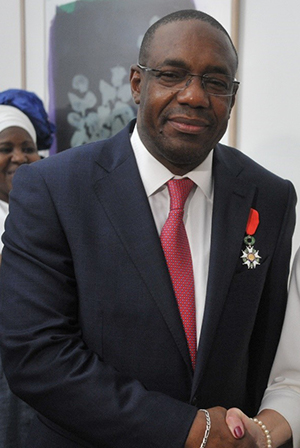 Samba Sow, MD, MSc, has been director general of the internationally recognized Center for Vaccine Development-Mali (CVD-Mali), which resides within the Ministry of Health of Mali, since its inception in 2001.

He also is the former Minister of Health of Mali and an adjunct professor of medicine at the University of Maryland School of Medicine. Under his leadership, CVD-Mali has made substantial contributions in clinical vaccinology, clinical research, field epidemiology, and public health policy in Mali and Sub-Saharan Africa. He serves on the board of Gavi, The Vaccine Alliance, a powerful international organization that successfully brings new and underused vaccines to the world’s poorest children. Sow has received numerous prestigious awards and honors in recognition of his impactful work in public health, including designation as an honorary international fellow of the American Society of Tropical Medicine and Hygiene and an officer of the National Order of Mali, and he won Chevalier de l’Ordre de Mérite de la Santé of Mali, an award presented by the president of Mali for his efforts in controlling the country’s Ebola outbreak. He has authored or co-authored more than 100 scientific articles and chapters.