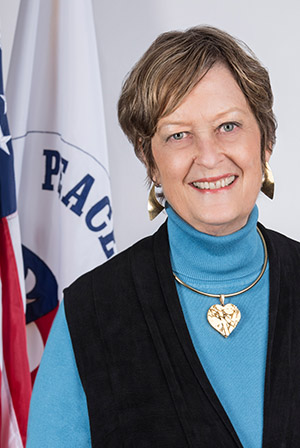 Olsen began her career as a Peace Corps volunteer, serving in Tunisia from 1966-68. She has since served the agency in multiple leadership positions — acting director, 2009; deputy director, 2002-09; chief of staff, 1989-92; regional director, North Africa, Near East, Asia, Pacific, 1981-84; and country director, Togo, 1979-81. Before returning to lead the Peace Corps, Olsen served as a visiting professor at the University of Maryland School of Social Work and director of the University of Maryland, Baltimore’s Center for Global Education Initiatives. She also oversaw health research projects in Malawi while teaching courses on international social work, global social policy, and global women and children’s health. Throughout her career, Olsen has championed the expansion of service, learning, and international opportunities for Americans of all backgrounds.