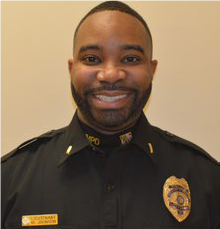 Lieutenant Matthew “MJ” Johnson is the commander of the UMB Police Department (UMBPD) Community Outreach and Support Team (COAST). A 14-year veteran of the UMBPD, Matthew has led COAST since its inception in 2018. The unit manages and organizes events to engage the community. It is comprised of homeless outreach and crisis intervention resources, a comfort K-9 police therapy dog, the Police Athletic/Activities League (PAL), and a community engagement academy. In 2021, COAST launched a pilot program with the UMB School of Social Work that pairs social work interns with police officers on the street.

Matthew is passionate about making an impactful change in our community and creating innovative programs that set the example of effective 21st century policing.

Matthew was selected as one of the top 40 under 40 in law enforcement leadership by the International Association of Chiefs of Police in 2019. That same year, COAST received the Governor’s Award for Outstanding Proactive Crime Prevention Programs in Maryland.  In 2020, he was awarded the Governor’s Certificate of Achievement for Crime Prevention. Also in 2020, COAST was awarded the Exceptional Police Performance Award for a Unit/Team/Collaboration by the Maryland Chiefs of Police Association.

Matthew is a veteran of both the United States Marine Corps and the Maryland Air National Guard. In his spare time, Matthew enjoys cooking, traveling, motorsports events (participating or spectating), and spending time with family.

Matthew believes that Diversity, Equity, and Inclusion (DEI) is vital to creating effective work and learning environments. He also thinks that DEI is pivotal to improving police and community relations. Matthew is a member of the UMB President’s Diversity Advisory Council (DAC).