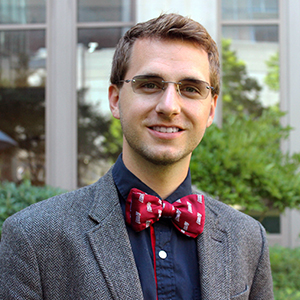 Greg Brightbill joined the University of Maryland, Baltimore (UMB) in spring 2016 as an academic coordinator and now works in the Office of Interprofessional and Student Learning and Service Initiatives (ISLSI) as its leadership education and involvement program specialist.

Brightbill’s responsibilities include the daily operation and coordination of the President’s Student Leadership Institute; assisting the UMB President’s Fellows in their White Paper Project, and developing LGBTQ+ and safe space programming for the UMB campus.

Before UMB, Brightbill worked in student services at Maryland Institute College of Art in Baltimore and James Madison University (JMU) in Harrisonburg, Va. He has a Bachelor of Science degree in psychology from Frostburg State University, a Master of Education in College Student Personnel Administration degree from JMU, and a Master of Business Administration degree from University of Maryland University College. Brightbill is pursuing a Doctor of Education in Higher Education Leadership degree from Frostburg State University with a research interest in exploring the intersection of graduate-level education and LGBTQ+ support services.

Beyond his role in ISLSI, Brightbill serves as a senator and member-at-large of the UMB Staff Senate. Also at UMB, he has led the development and implementation of workshops, lectures, and initiatives focused on LGBTQ+ populations, therefore improving the campus climate for LGBTQ+ staff, faculty, and students. In addition, Brightbill has represented the University at various events in the Maryland region, speaking about his experiences and knowledge related to safe spaces and LGBTQ+ inclusion.

Brightbill believes in the vital role of being an active ally. He regularly teaches faculty, staff, and students the role of advocacy and allyship, stating that to be a true ally one must challenge complacency and actively dedicate their time and energy toward dismantling prejudice and hate.