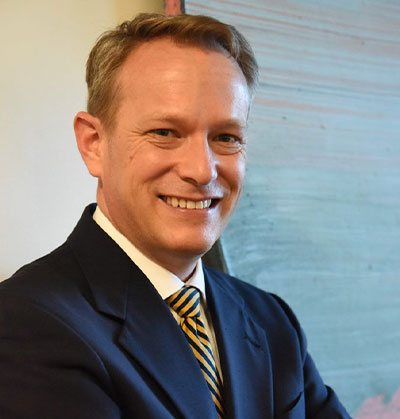 Acting vice president of philanthropy advances the cause for diverse, equitable, and inclusive hiring practices at all levels of his department

After completing the 13-credit certificate program in intercultural leadership through the University of Maryland, Baltimore’s (UMB) Graduate School in the spring of 2020 alongside colleagues from across the University, John McKee, MA, acting vice president of philanthropy, went to work on advancing department-wide policies for UMB’s Office of Philanthropy to foster inclusive and holistic hiring processes.

“The intercultural leadership program opened my eyes to racial justice and diversity and equity in ways that I had not seen before,” McKee says. Drawing upon policies already in place at the University of Maryland, College Park (UMCP), where he worked before joining UMB, McKee set to work drafting and proposing policies for the Office of Philanthropy collaboratively, with an eye to the uneven nature of the labor market and the challenges posed by existing inequities that are systemic and woven into the fabric of employment in higher education in ways that are often unseen.

“UMB did not have a requirement that diversity and equity be built into the hiring process,” McKee says. “Bachelor’s degrees, as an example, are not equitably distributed in this city or country.”

Rather than simply tacking on the requirement of a bachelor’s degree to all jobs as many employers do without a second thought, part of the Office of Philanthropy’s internal policy for recruitment instead demands that recruiters be very specific about what the hiring requirements are for a given role. In addition, the department now publicly posts the salary range for all open positions, and salary offers extended to selected candidates are no longer based purely on the candidate’s salary history. Such holistic practices, including paying to promote open roles on professional recruitment platforms that serve ethno-racial and other minoritized job seekers, serve to expand the Office of Philanthropy’s recruitment as the department works to proactively seek out diversity, equity, and inclusion as integral priorities.

Following UMCP’s model, the Office of Philanthropy has made it so that the hiring official for all roles is completely removed from the recruitment process in its early stages. Instead, a search committee for each open position is assembled across the department that aims to be as inclusive as possible of differing viewpoints and life perspectives to ensure there is an equitable stake in the hiring process.

McKee’s career in higher education philanthropy began more than 20 years ago at Gallaudet University in Washington, D.C., an institution whose influence guides his leadership to this day. As the world’s only university for students who are deaf or hard of hearing, Gallaudet faced its own challenges to equity and inclusion in the late 1980s when its students launched a successful advocacy campaign to instate its first-ever deaf president. Years later, while serving under the same president at Gallaudet, McKee was struck by how representation not only matters but also has a long way to go to achieving equitable and inclusive outcomes for all.

For starters, the workplace — including here at UMB — is a crucial place where equity can be fostered and diversity is not only valued but also integrated into all aspects of its operations.