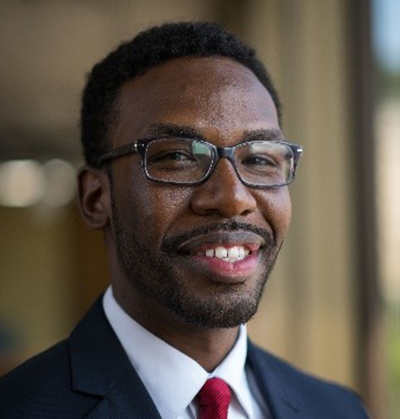 At this historic moment of societal reckoning with issues of racial justice, associate professor Chaz Arnett, JD, has been a vital addition to the University of Maryland Francis King Carey School of Law faculty.

A graduate of Harvard Law School, Arnett teaches and holds expertise in the areas of criminal procedure, race and technology, juvenile law, and education law. His research interests rest at the intersection of race, surveillance, and technology.

Arnett’s scholarship has examined the ways in which new technologies reproduce and entrench legacies of race and class subordination with the active assistance of law and policy. He has a particular focus on how surveillance technologies are used within the criminal legal system, in corrections and policing, and the impact these practices have on historically marginalized groups.

The Baltimore native’s most recent articles include “Race, Surveillance, Resistance” (Ohio State Law Journal), which argues that an increasingly powerful police surveillance regime must be met by an equally committed resistance through formal channels of lawmaking and informal pathways of community organizing, and “From Decarceration to E-carceration” (Cardozo Law Review), which explores the dangers presented by the use of electronic monitoring as an alternative to incarceration. Upcoming articles include “Black Lives Monitored” (Georgetown Law Journal) and “Crisis Surveillance” (Emory Law Journal).

Arnett previously was a visiting professor at the Carey School of Law and an assistant professor at the University of Pittsburgh School of Law, where he was designated as a Distinguished Public Interest Professor for his commitment to furthering social justice in his teaching, scholarship, and service.

Earlier in Arnett’s career, he served as a trial attorney with public defender offices in Baltimore and New Orleans and as a staff attorney with the Advancement Project, where he assisted in local and national campaigns aimed at combating the school-to-prison pipeline. As a recipient of the Satter Human Rights Fellowship, he also worked with the International Center for Transitional Justice on issues of constitutional development in Zimbabwe and on asylum cases for Zimbabwean refugees in South Africa.

“Critical, insightful legal scholarship and advocacy have always played a powerful role in understanding, challenging, and transforming law’s relationship with racial justice,” Arnett says. “I am happy to be a part of furthering that vital tradition.”

(Photo courtesy of the University of Pittsburgh School of Law)