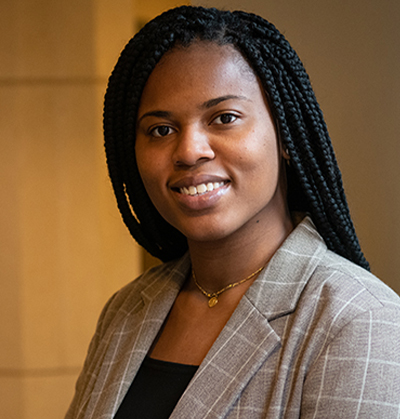 Maya Foster is a first-year student at the University of Maryland Francis King Carey School of Law. Upon admission to the law school, she was honored to be named a Diversity Scholar and receive the Honorable William H. and Madeline W. Murphy Scholarship. It was a fitting recognition of her stellar academic performance and leadership as president of the Black Student Alliance (BSA), vice president of diversity and equity for the Student Government Association, member of the Social Justice Education Advisory Board, and member of the Racial and Social Justice Committee at her alma maters — Oxford College of Emory University in Oxford, Ga., and Emory University in Atlanta.

Foster’s desire to promote diversity and build bridges of understanding between people of different backgrounds, identities, and political philosophies is longstanding but first found meaningful expression while she was an undergraduate. During her freshman and sophomore years at Oxford College of Emory University, she served as president of BSA, which included black students as well as students of other racial backgrounds. An integral part of the organization’s mission is to collaborate with other student organizations on campus to develop programs that would encourage open and constructive dialogue among students. One night in October 2016, BSA, in collaboration with the Intercultural Council and other groups, held what Foster felt was its most important and impactful event — the Black Student Alliance Police Brutality Vigil.

In the aftermath of the Philando Castile and Alton Sterling cases, two controversial police shootings of black men the previous summer, the vigil served as a call to action regarding the disproportionate number of black people killed by police in the United States. In her remarks during the vigil, Foster noted the importance of having students of color and non-black allies standing together in solidarity against injustice. The next day, the participants wore black T-shirts on campus as further demonstration of their unity on the need to find solutions to this issue.

Foster continued her efforts to encourage a culture that promoted diversity and inclusivity through her leadership roles as an upperclassmen at Emory University. Amidst a very divisive political climate in the country that was seen by some as triggering an increase in racial hostility across the nation, including at colleges and universities, she worked with administrators to ensure that students with opposing points of view could express those views and concerns in a public forum during tense times on campus.

Foster believes that diversity means more than physical representation. She believes that it also requires a partnership to create an environment in which diverse populations can thrive. As a law student, she seeks ways to participate in such a partnership with the Carey School of Law. She recently suggested that the school hold a special screening of the film Just Mercy, a true story about a black man who was wrongly convicted of the murder of a young white woman in a small Alabama town in the 1980s and was sentenced to death. It follows the journey of the inmate, his family, and his attorney who worked to overturn his conviction despite intense opposition and threats of violence against him. After Foster’s suggestion, the law school hosted a successful screening attended by faculty, staff, and students and followed by a discussion about disparities in the use of the death penalty and the lack of adequate legal representation for minorities and the poor in such cases.

In the future, Foster hopes to join with like-minded students at the Carey School of Law to promote greater understanding among diverse groups of students through open conversation; to provide input and feedback on the inclusion of race, class, and gender issues in the curriculum; and to serve as a sounding board regarding other ways to support students of diverse backgrounds. Upon graduation from law school, Foster plans to focus her work on advocating for marginalized communities.