William E. “Brit” Kirwan, PhD, former chancellor of the University System of Maryland, spoke about knowledge on April 1, 2016, at Westminster Hall. He said knowledge is something to celebrate but it also comes with challenges. 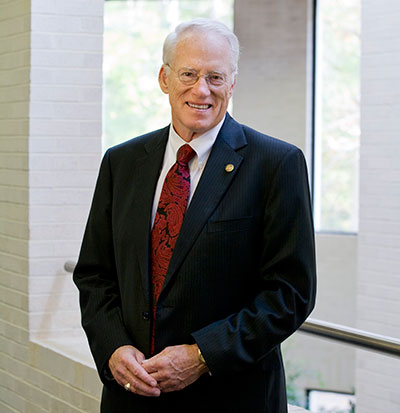 Kirwan brings a wealth of experience to his discussion of knowledge as part of the UMB Core Values Speaker Series.

Called  “a towering figure of U.S. higher education,” by UMB President Jay A. Perman, MD, Kirwan has had a long and distinguished career. Before becoming USM chancellor in 2002, he served as president of University of Maryland, College Park (UMCP) from 1988 to 1998 and president of Ohio State University from 1998 to 2002. Earlier, he served as vice president of academic affairs and chair of the Department of Mathematics at UMCP.

Guided by his long-held core belief that higher education plays a critical role in creating a more just and inclusive society, Kirwan has impacted the higher education landscape considerably. Common threads running through his career include his unwavering commitment to excellence and to increasing under-represented minorities' access to higher education.

Among the many initiatives he championed is Closing the Achievement Gap, which USM launched in 2007 to address the gap in college participation, retention, and graduation rates between low-income students, first-generation college students, and under-represented minorities on one hand, and the general student population on the other.

Other marks of Kirwan's leadership success include:

On the national level, Kirwan's leadership helped position USM as a model public higher education system in several areas, including enhanced stewardship of resources and academic transformation. With the launch of its Course Redesign Initiative in 2006, USM became the nation's first university system to redesign entire courses, supported by the innovative use of technology.

Kirwan served on several national boards, including the Business-Higher Education Forum and as chair of the National Research Council Board on Higher Education and Workforce. Among Kirwan's honors are the TIAA-CREF Theodore M. Hesburgh Award for Leadership (2010) and the Carnegie Corporation Leadership Award (2009), two of higher education's most prestigious awards. In 2002, he was elected to membership in the American Academy of Arts and Sciences.

Kirwan received his doctoral and master's degrees from Rutgers, The State University of New Jersey, and his bachelor's degree from the University of Kentucky, all in mathematics.

His commitment to education hasn’t ended in retirement.

“Higher education has always been part of my life,” he says. “I was born into a university family. There has never been a day of my life when my family’s life did not revolve around a university. I actually think that won’t change because I will continue to work on things I care about for as long as I can. And what I care deeply about is higher education and its capacity to change lives.”