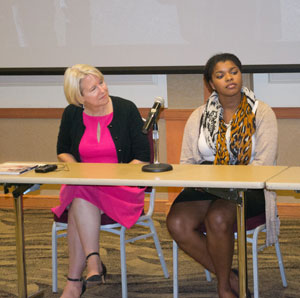 Peace Corps director Carrie Hessler-Radelet, MS, has stories from all over the world of how common people can collaborate to do extraordinary things. She shared her stories with a crowd at the University of Maryland, Baltimore (UMB) on Oct. 15 as part of UMB’s Core Values Speaker Series.

The Peace Corps, which celebrated its 55th anniversary the day before, deploys 7,000 volunteers to 65 countries around the globe where they work at the grassroots level for sustainable change, said UMB President Jay A. Perman, MD, in his introduction, lauding “the incredible work” of Hessler-Radelet’s organization.

Hessler-Radelet began her presentation, “Collaboration: Working With Communities for Change Here and Abroad,” explaining how the Peace Corps’ masters international program and Coverdale Fellows program both exist at UMB.

“Beyond our formal partnerships, one of the most important things we have in common is a shared commitment to collaboration,” she told those assembled at the Southern Management Corporation Campus Center. “UMB’s commitment to collaboration is embodied in its work with the broader Baltimore community — the six professional schools and the incredible efforts of your Office of Community Engagement. Your outreach and the level of engagement far exceeds most public universities and you are a model of leadership in that regard.”

Then Hessler-Radelet began her stories, speaking of how Peace Corps volunteer Alex Munoz had transformed a group of women in Quito, Ecuador. Largely single mothers, they supported themselves as “Dumpster divers” gathering anything recyclable, which they sold. “They worked at night because they were ashamed for anyone to see them,” Hessler-Radelet recounted.

Munoz brought the women together and explained how if they worked together they could accomplish much more. “The women began to care for each other, watch out for each other. They acknowledged strong personal relationships of trust. And through a discovery process led by Alex they found small, do-able changes to increase productivity and safety,” Hessler-Radelet said.

They pooled their resources to buy a plastic compactor, as well as gloves and masks. They began making jewelry, handbags, and baskets with the recycled material to increase profits. And they formed an Association of Environmental Promoters with elected leaders and uniforms bearing the tagline “Keeping Quito Clean and Healthy.”

Maria, president of the association, summed it up, Hessler-Radelet said. “Before we were scavengers. Now we are recyclers, artisans, entrepreneurs, community leaders. Our children are proud of us. People respect us. The women of Pichincha have found their way, their potential, their dignity.”

Hessler-Radelet, herself a returned Peace Corps volunteer (Western Samoa, 1981-83), said such stories are quite humbling. “When I met these women it made me believe I could never complain a day in my life. Because they are so grateful for everything they have.”

In Western Samoa Hessler-Radelet met Jody Olsen, PhD, MSW, who rose to become acting director of the Peace Corps. Now Olsen is visiting professor at the School of Social Work and director of the UMB Center for Global Education Initiatives. “Jody remains a great friend and mentor,” said Hessler-Radelet, “and I’m so grateful she arranged this visit today.”

She pointed out her Peace Corps volunteers — 23,000 Americans last year, more than double the number who volunteered in 2013 — live the way their community lives. If the town lives in mud huts, the volunteers live in mud huts. “This leveling of the playing field requires open hearts and open minds, a belief that working together is stronger than working apart.”

Hessler-Radelet, who has more than two decades of experience in public health and was involved in the establishment of the President’s Emergency Plan for AIDS Relief, was especially touched by a malaria expedition to Kedougau, Senegal, by volunteer Ian Hennessee. Ian befriended a man named Cheihk, who was head of the community organization trying to combat Senegal’s soaring malaria rate. It was so common many in Kedougau never sought treatment. When Cheihk’s 4-year-old niece contracted malaria and died three days later, Cheihk and Ian were devastated, since their work sought to prevent such deaths. Cheihk and Ian and their health workers put their heads together. What can we do about this?

They proactively reached out to the 500-person community. They went door to door asking about symptoms and tested and treated people on the spot. In one rainy season, their efforts showed a 90 percent decrease in malaria. They repeated the study in a 15-village study, Cheihk’s team training other community workers. Results were the same.

“Just a few months ago, the Peace Corps and the National Malaria Control Program of Senegal completed a large-scale trial of 1.45 million people,” Hessler-Radelet proudly told the UMB crowd. “Seventeen Peace Corps volunteers, thousands of community health workers. The result was an 88 percent decrease in malaria. It has become the Government of Senegal’s national approach to malaria and is now under consideration for a program around the world. It came about because Ian and Cheihk worked together, identified a problem and a solution, and took it to the community.”

Collaboration is one of UMB’s seven core values. Hessler-Radelet’s presentation was the third in the Core Values Speaker Series led by Perman. Ronald M. Shapiro, JD, best-selling author, attorney and sports agent, spoke about civility on March 30 and Norman Augustine MSE, former chair and CEO of Lockheed Martin Corp., discussed leadership on May 11. UMB’s other core values are accountability, diversity, excellence, and knowledge.

“None of the Peace Corps’ collaborative efforts would have been possible without a strong relationship at the community level, bringing in stakeholders, and that applies to Baltimore and its problems,” Hessler-Radelet said. “You need to listen to each other, and then work together toward a solution. You improve the conditions for peace, which is what we’re all about.”

Hessler-Radelet’s last story involved Peace Corps volunteers Kerry Hellmuth and Robert Soderstrom, who were working with farmers in Papua, New Guinea. They lived in grass huts with the villagers. There was no electricity or running water. At night the villagers would come together and tell stories.

One night Robert pulled out pictures from his native Chicago. The villagers were fascinated by the mammoth skyscrapers, but they also noticed a homeless man seeking donations. “How can someone have so little in a city that has so much?” the villagers asked. Robert and Kerry tried to explain, but the night ended on a solemn note, Hessler-Radelet said.

“The next day several villagers approached Robert and Kerry and said, ‘We’ve just held a meeting of the town council. We have a proposal for you. Please contact that man in the photograph. Have him come here. We will make him a home just like we made you a home. We’ll give him a job just like we gave you a job. We will welcome him with open arms.’ What a humbling moment for Robert and Kerry.”

Hessler-Radelet added later, “One of the problems we in our country have is we think we have all the answers and we’re going to go over to distant places and help people. But the truth of the matter is we have so much to learn from them.”‌

The partnerships between UMB and the Peace Corps that Hessler-Radelet had discussed earlier were much in evidence at a panel discussion that followed her talk. Panelists included Marik Moen, assistant professor at the School of Nursing who served in Gabon from 1998‒2001; Ebony Nicholson (in photo above on right with Hessler-Radelet), a Peace Corps Fellow with SWCOS (Social Work Community Outreach Service) in the School of Social Work and a Diversity Fellow, who volunteered in Zambia from 2011 to 2013; and Lane Victorson, MSW, director of community organizing for SWCOS and coordinator of UMB’s Peace Corps Fellows Program, who served in the Federal Islamic Republic of the Comoros Islands from 1992 to 1994.

They spoke of their experiences and joined Hessler-Radelet in answering questions from Perman and others.

In closing, Hessler-Radelet urged the attendees to participate in public service.

“I hope each of you has the opportunity to step into someone else’s shoes and see the world as they do and understand what it means to provide a hand up, not a handout. No matter where we come from, no matter what circumstances we may face, we’re all students and we’re all teachers. Each one of us has the capacity to be a peacemaker, a peace seeker, and a powerful collaborator. Let it be so.”