Carrie Hessler-Radelet, director of the Peace Corps since June 2014, spoke at UMB in the Core Values Speaker Series on Oct. 15, 2015.

Peace Corps director Carrie Hessler-Radelet, MS, has stories from all over the world of how common people can collaborate to do extraordinary things. 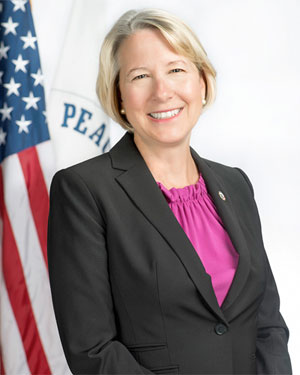 Since 2010, Hessler-Radelet has spearheaded a comprehensive agency assessment and reform effort to improve efficiency across the organization — the ﬁrst such endeavor since its founding in 1961. As deputy director, she led the rollout of the Focus In/Train Up initiative, which provides targeted technical training to volunteers to increase their capacity-building abilities. In her concurrent role as chief operating officer, she ensured the agency was a vigilant steward of government resources and taxpayer dollars.

During her tenure, Hessler-Radelet has led the implementation of new policies and processes to improve the health and safety of volunteers, including the requirements codiﬁed in the 2011 Kate Puzey Peace Corps Volunteer Protection Act and policies and programs aimed at reducing the risk of sexual assault and violent crime. She was instrumental in instituting the new Office of Global Health and HIV and the Global Health Service Partnership as well as led an effort to overhaul volunteer recruiting and engage more volunteers in post-service public education activities.

Before her conﬁrmation as deputy director, Hessler-Radelet was vice president and director of the Washington, D.C., office of John Snow Inc., a global public health organization, where she oversaw the management of public health programs in more than 85 countries.

Hessler-Radelet was actively involved in the establishment of the President’s Emergency Plan for AIDS Relief (PEPFAR) and was a primary author of PEPFAR’s ﬁrst strategic plan. She also was founder of the Special Olympics in Gambia in 1986, which is still active there.

Hessler-Radelet holds a Master of Science in health policy and management from the Harvard School of Public Health and a Bachelor of Arts in political science from Boston University.

Hessler-Radelet also served as acting director of the agency from September 2012 to June 2013.