Civility is the first of UMB’s seven core values to be honored with such an event. Future talks will feature experts such as Peace Corps Director Carrie Hessler-Radelet on collaboration, and William E. Kirwan, chancellor of the University System of Maryland, on knowledge.

“If our goal is to live these values, we need to examine them more deeply,” said UMB President Jay A. Perman, MD, as he introduced Shapiro in the Elm Ballroom at the University of Maryland, Baltimore Southern Management Corporation Campus Center. “This [speakers series] is our chance to break open a dialogue with some of the country’s most influential speakers.” 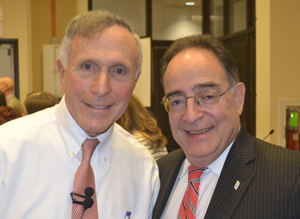 Shapiro has authored a number of New York Times bestselling books, including “The Power of Nice” and “Dare to Prepare.” He founded the law firm now known as Shapiro, Sher, Guinot & Sandler, and the sports management firm Shapiro, Robinson & Associates. In 1995 he founded the negotiation and sales training and consulting firm Shapiro Negotiations Institute.

Perman introduced Shapiro with a reference to one of his best-known books, saying, “No one speaks more passionately about ‘The Power of Nice’ than Ron Shapiro.”

Shapiro began by describing how negotiations such as those in times of war or in Congress can deteriorate because of negativity and bad attitudes, and because of people who refuse to work together.

“Incivility breeds incivility,” Shapiro said. In the case of “leader incivility, the leader squeezes his or her staff for everything he can get out of them. We see the results of this in burnouts than can occur.”

Shapiro remembered a colleague early in his law career who urged him to be as tough as possible on the tenants who came to Shapiro to negotiate rents for the real estate they occupied. Shapiro told his colleague, finally, that he wasn’t comfortable with “squeezing” the tenants.

“He said, ‘You’re just going to have to burn that bridge when you come to it,’” Shapiro remembered. “That day I realized it wasn’t about burning bridges, it was about building bridges. Relationships are too important to ignore.”

The payoff of good relationships, Shapiro said, are ”bonds of trust.” Shapiro described using the bonds of trust he had formed with Major League Baseball owners in order to help build his Shapiro Negotiations Institute. Mutual kindness and respect – civility – had led to strong relationships and bonds of trust with the owners.

“Without civility, these relationship dividends would not have been reaped,” he said.

Shapiro also recalled a difficult salary negotiation for Oriole Eddie Murray, who believed – decades ago – that he should make $1 million a year. Then-Orioles owner Edward Bennett Williams refused. Shapiro had a good relationship with Williams, who owned the team from 1979 to 1988, and talked him into a $1 million salary for Murray that paid $600,000 up front and the rest over the next few years.

The Murray story was an example of another important tenet of being civil, Shapiro said: “Think not only about your wants and needs, but also be open to theirs as well.”

Shapiro listed concrete ways focusing on civility can change day-to-day interactions for the better. Being a better listener involves stopping to ask questions and to really listen to people, “listen actively, with sensitivity to their needs,” he said.

He listed simple ways to tell if someone is not listening – behaviors that should be avoided, of course. Those include poor eye contact, distractions such as cell phones, interruptions, irrelevant responses, and poor body language.

Tips for listening effectively included maintaining good eye contact, eliminating distractions such as cell phones, clarifying and confirming what the other is saying, and using attentive body language.

“Living the core value of civility will enable you to lead more effective and fulfilling lives, and that’s my wish for all of you,” Shapiro said in closing.

During a light lunch after the presentation, audience members offered questions.

“When you have a very highly competitive workplace with very motivated, highly skilled people -- similar to elite athletes -- how do you keep civility? That type of productive competition can sometimes cause conflict,” said Maureen Kotlas, CSP, CPEA, director of Environmental Health and Safety at UMB.

“It’s kind of like raising a family – you transmit values,” Shapiro replied. “Jay said, I want to have these core values at this university.”

Shapiro said his seven children have absorbed values from him: “They know I care about one thing – are they good people?”

He also described learning from his father, a Jewish man who emigrated from Kiev in Ukraine to America at the turn of the 20th century. “He taught me a value. Whether it was the guy who parked your car or the chairman of the board, he treated them all with the same respect. That’s transmission of values.”

How could civility assist in extremely difficult situations such as the budget negotiations in Congress, asked Arnold Hoffman of the University of Maryland Marlene and Stewart Greenebaum Cancer Center.

Susan McKechnie, controller in financial services at UMB, asked whether being “genuinely nice” is a skill that can be learned.

“I love the core values and I love the mission here,” Shapiro added.