View our Community Campus Neighborhood Map
Give to the Community

In February 2018, the University of Maryland, Baltimore (UMB) launched a Police Athletic/Activities League (PAL) chapter for young people in West Baltimore. UMBPAL is a collaboration between UMB’s Community Engagement Center (CEC) and Police Department (UMBPD), and is one of just two PAL programs based at a university in the United States.

Activities include physical fitness, career exploration, community service, visual arts, reading enrichment, and computer animation. A puppeteering workshop led by the founder of a neighborhood theater enables children to exercise their creativity and public speaking skills through performance and much more.

A primary goal of UMBPAL is to nurture relationships between police officers and neighborhood girls and boys. After the inaugural year, two-thirds of PAL children reported having greater respect for law enforcement officers and 80 percent said that they had improved outlook on their future because of the mentoring program.

Connect With Our Community 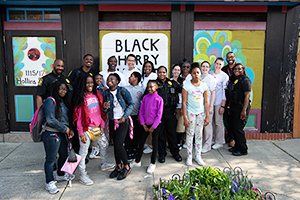 We invite your partnership in and commitment to joining the growing number of UMB Community Campus benefactors deeply vested in transforming the lives of children and families in one of Baltimore’s most challenged yet resilient communities.

Learn how you can support the UMB Police Athletic/Activities League. 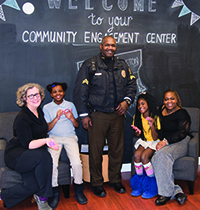 “It’s an innovative approach to not only connect law enforcement to the community but also to stress the importance of higher education to these kids.” 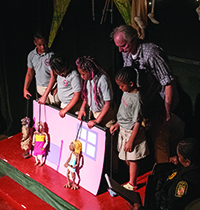 “I think this will build a great relationship between the entire community and the police department at UMB and hopefully police officers all over. I think we are breaking a lot of barriers right now.”

A unique and remarkable feature of UMBPAL is the ability to leverage the resources of UMB and the University of Maryland Medical Center (UMMC) to offer a distinctive curriculum. UMBPAL officers and staff have been trained by the UMB School of Social Work’s Positive Schools Center to use restorative practices, community circles, and trauma-informed care to support the youths social and emotional development. Students from UMB’s School of Nursing meet with boys and girls for project-based learning that emphasizes fun as well as academic enrichment. And emergency room surgeons and nurses from UMMC’s R Adams Cowley Shock Trauma Center have worked to certify the entire UMBPAL chapter – young people and their mentors – in Stop the Bleed, a life-saving technique.