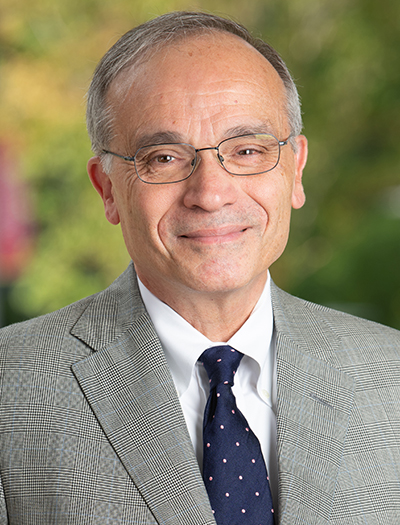 He will soon add the word “retired” to both titles, as he plans to retire June 1, less than two weeks after serving as the University of Maryland, Baltimore’s (UMB) Honorary Faculty Marshal for 2022 commencement.

“Once retired, I will want to stay involved in work to some degree, and I want to be sure that I stay connected to my great colleagues,” Palumbo said. “But I also look forward to spending more time with my wife and family.

“It was an honor to be selected as a marshal,” he added. “It’s also wonderful to know that this will be an in-person event, because I’ve sorely missed the personal interaction with my colleagues and students.”

Pharmacy and law students appreciate his deep knowledge, thoughtful feedback on their papers, and willingness to go the extra mile to help them with their research. This was evident in 2019 when he was named UMB Educator of the Year, bolstered by five nominations from former students.

When asked about his most impactful accomplishment, though, he first points to his UMB colleagues.

“I’ve had the honor to work with so many talented faculty at all of the schools,” Palumbo said. “I’m proud of the research I’ve engaged in and the recognition of that work by being invited to join a National Institutes of Health study section.”

Palumbo’s pharmacy law class helps students prepare for the part of the pharmacist licensure exam that tests their knowledge of federal and state law. In addition, he and his colleagues annually hold a two-day law review session for UMSOP graduates, graduates of other schools, and pharmacists from other states pursuing licensure in Maryland.