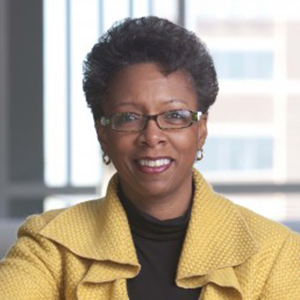 Natalie D. Eddington became dean of the University of Maryland School of Pharmacy in August 2007. Eddington, an alumna of the School, was formerly chair of its Department of Pharmaceutical Sciences.

Eddington graduated summa cum laude with a BS in pharmacy in 1982 from Howard University. She earned her PhD from the University of Maryland School of Pharmacy in 1989 and, after working as assistant director of new drug development at Pfizer Inc., joined the faculty in 1991. She was appointed director of the School of Pharmacy’s Pharmacokinetics/Biopharmaceutics Laboratory in 1999, and became chair of the Department of Pharmaceutical Sciences in 2003. As chair, she guided the launch of the Center for Nanomedicine and Cellular Delivery, which brings together a collection of scientists to find new and better ways of providing pharmaceutical treatment. It is the School of Pharmacy’s first Organized Research Center.

Eddington is a nationally known expert in drug delivery and pharmacokinetics, the movement of drugs in the body. Her research focuses on cancer therapy and treatments for disorders of the central nervous system. Her work has been supported by funding from the National Cancer Institute, the National Institute of Mental Health, the National Institute on Drug Abuse, the U.S. Food and Drug Administration, and the pharmaceutical industry.

In 2014, she was named executive director of University Regional Partnerships at the University of Maryland, Baltimore (UMB), a position she assumes while maintaining her leadership of the School of Pharmacy. In this role, Eddington assists UMB’s senior vice presidents, working collaboratively with the deans, on issues related to the expansion of the University's academic and research programs in Montgomery and Prince George's counties.

Her honors and awards include: