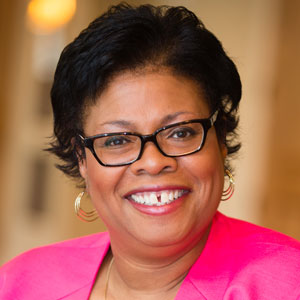 Dawn Rhodes has more than 35 years of experience in finance and operations, including 27 in higher education.

Prior to coming to UMB, Rhodes served as the vice chancellor for finance and administration for IUPUI, an urban public research institution and a core campus of Indiana University. She had spent nearly 15 years at the University of Toledo, holding several executive leadership positions. For a period between 1998 and 2000, Rhodes served as the vice president for business and finance at Savannah State University, an HBCU.

Several achievements have distinguished her career. Since joining UMB in 2016, she has brought transparency to university finances, launched a revitalized Live Near Your Work Program, created a Department of Emergency Management, and hired the first female police chief for UMB. Other career achievements include creating a blue-ribbon customer service program known as Service with Distinction, leading a transformative hotel conversion project that included bringing 15 new classrooms online, 560 additional residence hall beds, and the campus’ first-ever dining hall facility. She created an Office of Intergroup Dialogue and Civil Community, an office to support the conversation and activities of diversity and inclusion and to facilitate civil discourse across campus.

Rhodes believes in giving back to higher education. She has served on the Central Association of College and University Business Officers’ Board of Directors as second vice president, president, past president, and second past president. She also served eight years as a member of the National Association of College and University Business Officers’ (NACUBO) Board of Directors. During her tenure, she served as chair of the ad hoc committee on Next Generation Business Officers, as a member of the ad hoc committee on Identifying and Disseminating Effective Analytics, and on the Finance and Audit Committee. She has been a faculty member at NACUBO annual meetings and an author for NACUBO’s Business Officer magazine. She currently serves on the board of Higher Education Research Services.